If the thought of traveling to a foreign land terrifies you due to the language barrier or if you are just trying to learn a new language you should consider looking into translator apps.

While an internet connection is available pretty much everywhere you go, when traveling it can sometimes be hard to come by. You may not want to invest in the extravagant roaming charges or maybe you just want to be off the gride to fully immerse yourself in your adventure.

That is why we have put together this list of the best offline translator apps you can choose from so that you can be prepared for your next vacation, whenever COVID gives us the ability to get back to normal.

So, without further ado, here are our picks for the top offline translator apps.

Here are our picks for the best offline translator apps you can choose from: 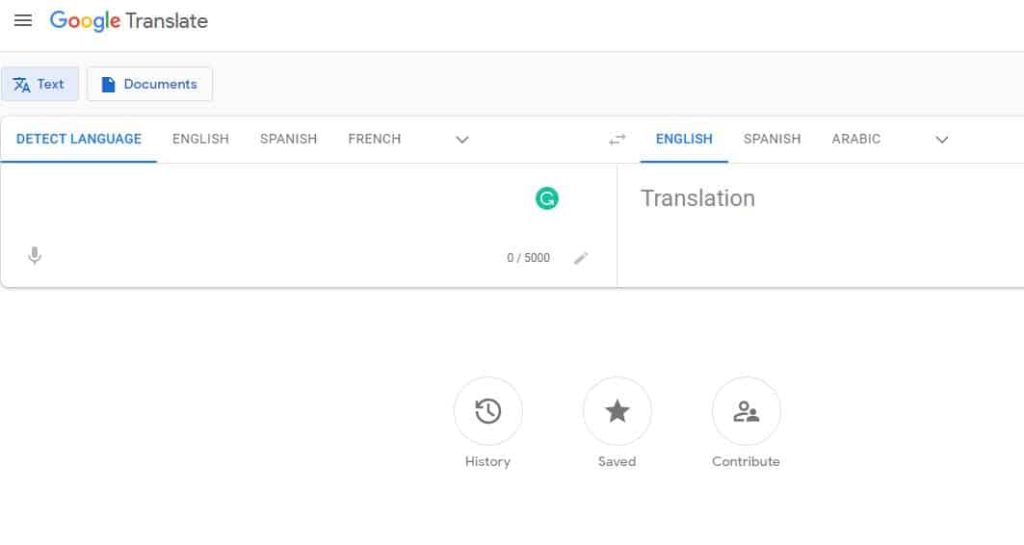 Google Translate needs no introduction and is arguably one of the most popular and known translators on this list.

The app works both online and offline making it a great choice as you can take advantage of its features even if you don’t have connectivity.

Google Translate’s offline version also offers transliteration thus allowing you to not only translate spoken words but also convert the script to your language of choice.

When connected to the internet Google Translate offers the ability to translate to and from 103 different languages, this is partially limited in the offline version which offers 59 languages.

While the app is free to use, remember to download the language pack necessary to use the application’s offline version. 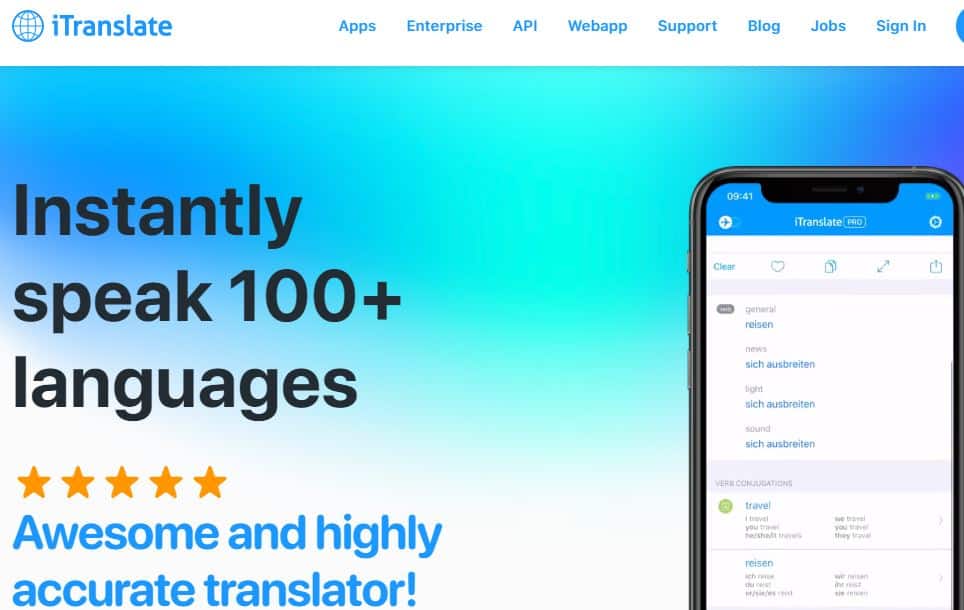 iTranslate is a great translator app that has an intuitive interface allowing you to seamlessly translate words and sentences making it a popular choice for many users.

Being an Apple Design Award winner for 2018 further reiterates the great way the app is created to make it both easy to use and a go-to for translation.

Similar to Google Translate, iTranslate offers some variations in its online and offline functionalities. With an internet connection iTranslate allows you to translate between 90 different languages. These languages even include some specialized ones such as Canadian French and non-standard Arabic languages. 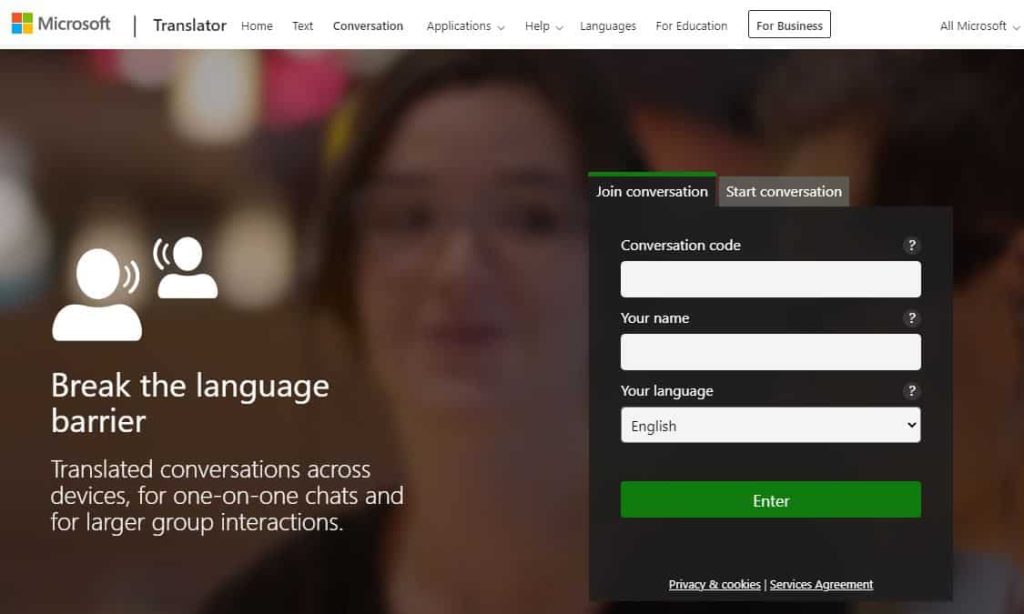 Microsoft Translator is a great translating tool especially with its ability to sync and integrate with other Microsoft tools.

Microsoft Translator comes equipped with the ability to translate to and from 70 different languages, although the offline version is somewhat limited in its functionality.

One of the unique features available in Microsoft Translate is the ability to have conversations within the app. If two people have the application downloaded you can connect your devices and converse in real-time.

You can use this live conversation feature with more than two people and up to 100 people.

You also have camera and screenshot translations which are great for translating signs or menus and such when you are traveling.

12 Best Microsoft Teams Integrations to Use in 2022

Naver Papago is next up on our list. This translator app supports over 13 languages and provides features to enable you to understand and translate content into your native language.

Besides basic translation, the app also offers a dictionary where you can view the definition of different words as well as a history of what you have translated in the past. 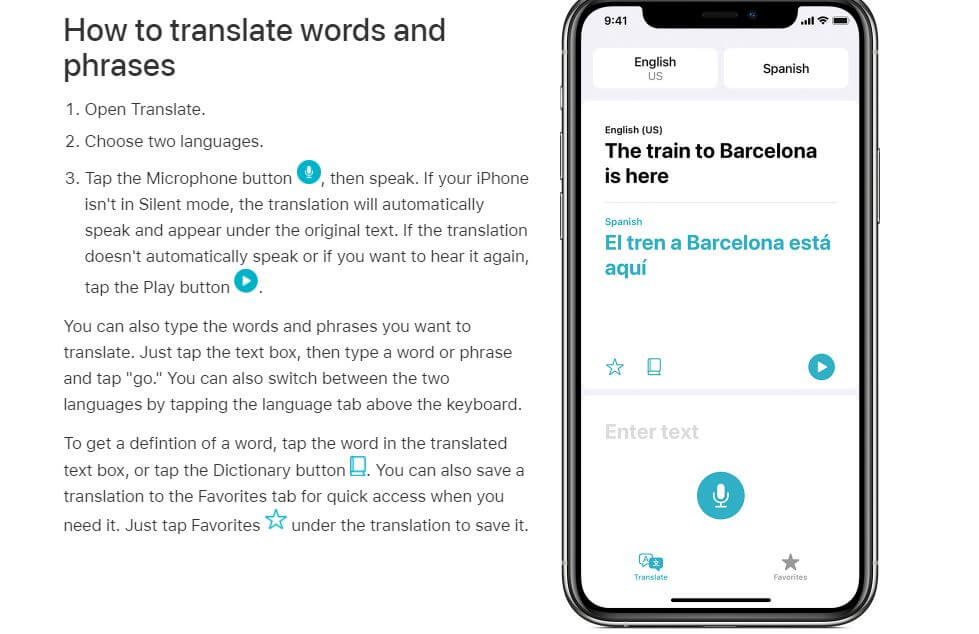 Apple Translate offers the ability to translate both voice and text into different languages including 11 languages offline as well.

To use the offline version be sure to download the necessary language pack.

Apple Translate not only allows you to translate complete conversations but also lets you replay them at a later time. You also can save phrases to favorites for easy access.

Translate Now is another great translator app that offers features including voice translation, AR translation, camera translation, and more to help you both communicate and understand other languages besides your native language.

With Translate Now you have some unique features you can take advantage of as well.

These unique features include the ability to create a custom phrasebook that you can access instantly.

You also have the ability to use a translator keyboard which you can use to type in around 60 different languages on different apps and platforms. 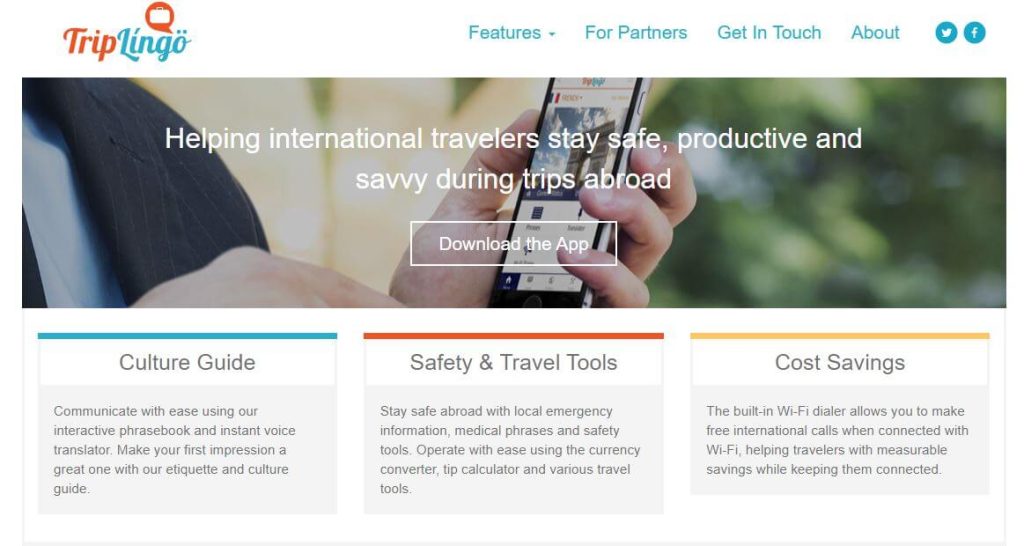 In any list of translator apps, you have to include TripLingo, which with its range of features makes it a perfect travel companion.

The application supports translation for over 100 countries, and 13 languages. You can use the application’s instant voice translator to translate to and from around 42 different languages.

What is unique about TripLingo is that besides the basic translation ability, the application also offers around 1000 phrases in four different local slang levels thus allowing you to fully immerse into any region and converse with locals with ease.

With the offline version, TripLingo supports a 10,000-word offline dictionary. 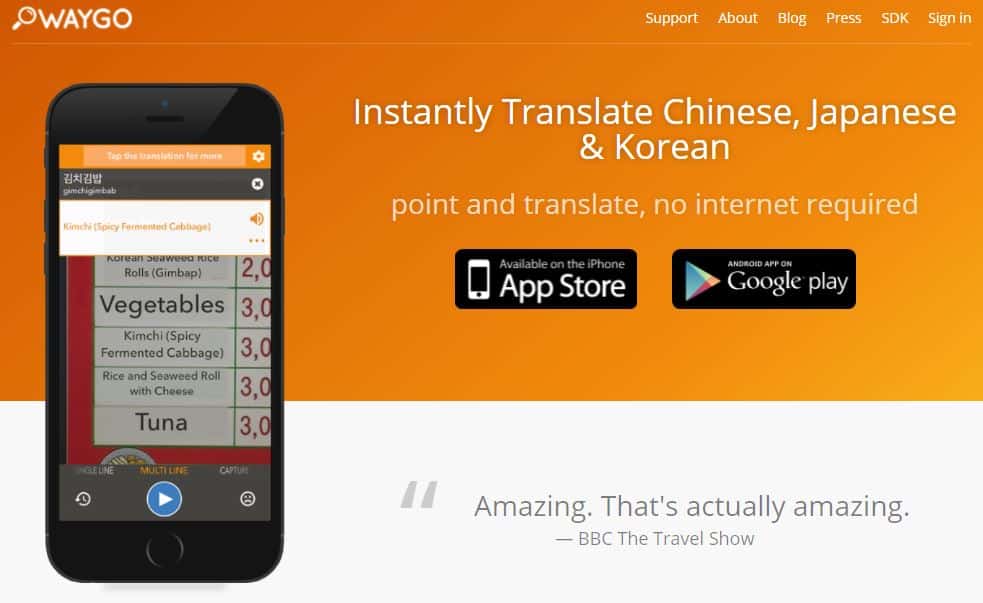 The Waygo app while limited in the languages it translates from is still a powerful translation application and therefore is our next pick for the best offline translator app.

The application does not require any internet and only needs you to point your phone’s camera towards the words you are trying to translate to allow it to translate for you.

The application is focused on food translations thus making dining experiences a breeze. 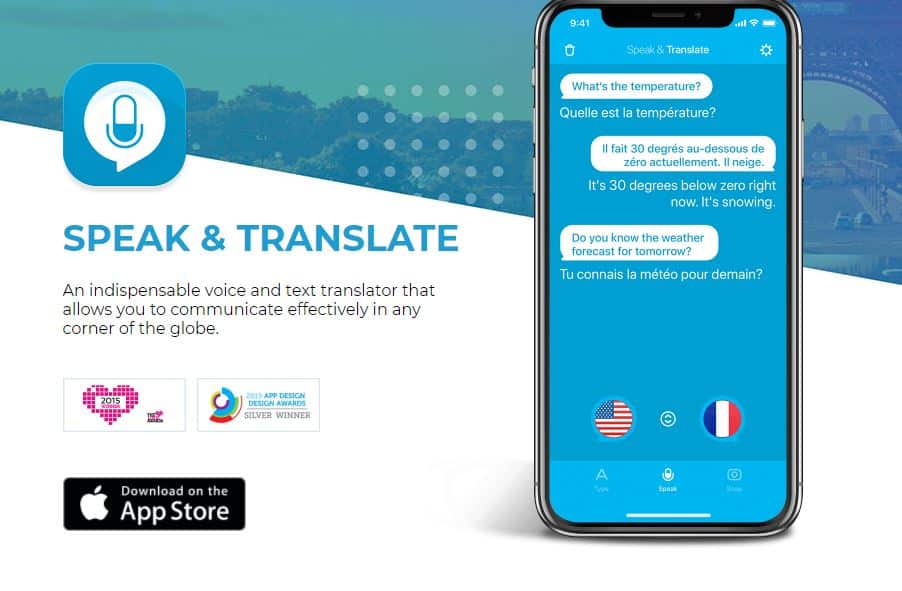 Speak and Translate is based on the real-time translation of conversations. The application offers the ability to translate to and from over 117 languages making its use versatile and thus being a great choice of translator app.

However, it must be noted that the offline version of the app allows you to translate to and from 59 different languages.

Speak and Translate also offers camera translation as well as a load of other features including iCloud integration and much more. 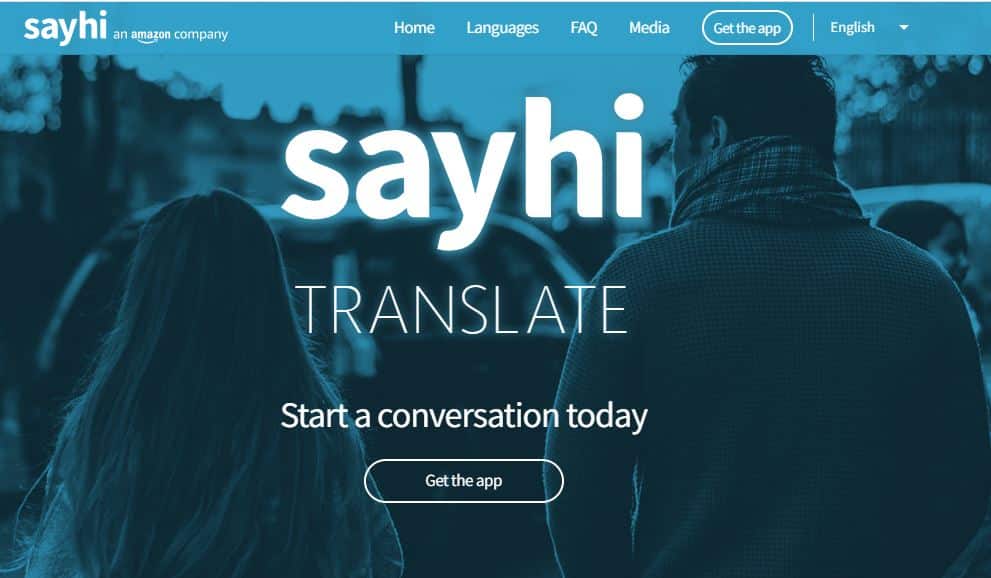 Another amazing translator app that you can use is SayHi translate.

Although it is an incredible application that can help you translate all of your queries in any language that you want, it sadly doesn’t have an offline mode that allows you to translate your queries without an internet connection.

Still, it is an incredible solution to all your translation queries thanks to the amazing feature set that it has to offer to all of its clientele around the world.

The application offers many different features like the easy copy and pastes feature on its interface so that you can easily copy any piece of text that you want and paste it on the interface, and it will automatically translate it for you without any issues.

The application also has the support of numerous languages from around the world, so you won’t be let down by any query that you may throw at the application, because it won’t disappoint you and it will get the job done.

Furthermore, the application also has different features like a dialect detector which will help you know which dialect the other person is using to speak their language.

The application is completely free to use and is available on both the iOS and Android platforms.

There you have it, here are our picks for the best offline translator apps.

These apps and tools can not only help you in your next adventure and vacation to a land unknown but can also be used to learn new languages and add to your skills. Feel free to share your feedback on frank@productivityland.com.

Top 3 Integrations to Use with Your Time Tracking Software

Best ProofHub Alternatives to Use in 2022